Specialists in the transport of earthmoving and construction machinery, access plant, fork hoists

Minishifts has been operating in the Auckland region since 1994. 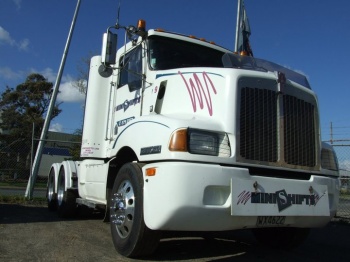 Owned and operated by Steven Speir, the company has gone from strength to strength and developed a strong reputation as a professional and reliable operation. Minishifts are the transporters of choice for many organisations both Auckland-wide as well as moving equipment in locations such as Waiheke and Wellington.

Our fleet of specialised units, experienced drivers and staff, mean that Minishifts can efficiently handle whatever you can throw at them – no matter how tricky the job.

The key operators of the business are Steve Speir and Ben Speir.

Owner, Steve Speir, has a certain passion about the business that sees him behind the wheel of a truck most days, rather than in the “office”. As the front man of Minishifts, Steve takes a very personal and hands-on role in the transportation needs of his customers. Steve prides himself on Minishifts' excellent reputation and always strives to go the extra mile for his customers.

As Operations Manager, Ben is your first port of call if you need something moved. His ability to juggle a few balls at once means he can communicate and co-ordinate with drivers easily, in an often frantic environment. With his finger on the pulse of everything that moves in the Auckland region and sometimes further afield, Ben makes sure your transportation happens as smoothly and quickly as possible.

We'll move just about anything!